Transport for Wales (TfW) recently released its Annual Report, which outlined TfW’s commitment to reducing the gender pay gap. Quadrant Smart investigates the report and looks at how TfW is aiming to balance the gender gap in the rail industry.

Seeing a balance of the gender gap is needed in the rail industry, and women need to be encouraged more to want to get a job in the industry. Problems such as the gender pay gap and not enough women in leadership positions must be overcome.

Women Must Be Better Represented In Leadership Roles

Regarding recruitment, it is said that over the past year, women have made up 47.9 per cent of total hires and accounted for 51.3 per cent of the total internal promotions made in the year. This is compared to 32.1 per cent in the previous year.

In terms of the different quartiles, the top quartile sees only 24 per cent of women employees, the upper middle sees 35 per cent, the lower middle sees 42 per cent, and the bottom sees 47 per cent.

Seeing only 24 per cent of women in the top quartile is worrying and highlights the issue of needing more women in higher positions. To do this, the industry needs to find ways to focus on encouraging women to take up leadership positions so that we can grow current and future leaders.

To encourage women to take up these positions, for a second year, TfW has sponsored the Chwarae Tag LeadHerShip programme. It aims to ensure that women become better represented in decision-making roles and aims to provide women with a platform so that their voices are heard and they are inspired to see themselves as future leaders.

A reason why women may not be encouraged to get a job in the rail industry is down to the pay gap. TfW has revealed that though it has become better in the past year, the median gender pay gap in 2022 was 32.8 per cent. Men were being paid a total of £19.08 compared to a woman’s £12.82 per cent. 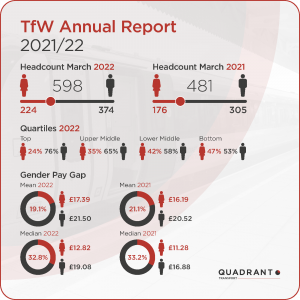 A lack of gender diversity in the transport industry’s workforce and leadership has been revealed to be undermining the industry’s net zero targets in a new report by the International Transport Forum (ITF), supported by the FIA Foundation.

ITF’s study has examined the linkages between gender equality, transport and climate change to better understand the development of policies that can achieve both gender equality and decarbonising transport goals by 2050.

A consistent approach to incorporating a gender dimension into decarbonising transport policies for users and improving the gender balance in the transport workforce has been identified by the report as having the potential for a significant impact.

Four groups of guiding principles have been identified, these are the following:

To balance the gender gap. TfW has said it is continuing to work on its strategic equality plan and have delivered EDI training for the HR department, senior leadership team and people managers.

In addition to this, TfW has developed a cohort of Fairness, Inclusion and Respect ambassadors. Together with its external EDI partner Delsion, it has completed a review of its policies to determine where improvements need to be made to ensure they are meeting the objectives of our strategic equality plan.

It is anticipated that more women will be attracted into the transport industry going forward as programmes such as the Welsh Women in Transport Hub, Women in Leadership and a Step to Non-Exec form part of a wider HR strategy which is currently being implemented across the whole of TfW are aiming to encourage more women to join the industry and reduce the gender pay gap.