As the rail industry aims to upgrade the existing track while building new developments fit for the future, improve safety and project delivery, there is one clear connection. The use of technology will help meet all of Network Rail’s objectives more efficiently.

Often one technological advancement in the industry will lead to multiple benefits, including increased passenger and worker safety, faster project delivery times and lower cost of projects.

Innovative technology is playing an increased role on the railway. The industry is constantly researching new technology to help Network Rail run a better and more efficient railway for freight and passenger trains.

To ensure the next generation of the workforce bring innovation into the industry, Network Rail has a dedicated Accelerated Innovation Project within the R&D portfolio and has developed relationships with key universities across the countries.

While many technological innovations are happening across the network, here are four critical uses of technology in rail today.

Last year, Network Rail took another stride in its mission to roll out the Digital Railway. Its objective is to provide better and more journeys as demand for train services increases.

An example of this was the East Coast Digital Programme (ECDP), which saw Siemens Mobility and Atkins in an effective programme to introduce in-cab signalling on the southern section of the ECML.

Reducing thousands of passenger delays, it is hoped the use of technology will be a success for future developments and lay the framework for wider national roll-out.

These technological improvements mean that the ECDP will be Britain’s first intercity digital railway. Removing old lineside signals with in-cab ones means that signallers will constantly communicate with trains, rather than intermittent comms at fixed points.

Responses will be received in real time, improving reliability and reducing costs and volume of delays, which is currently a barrier for modal shift.

Traffic management is often associated with cars and HGVs on the road network. But technology is also helping with traffic management on track. For example, in 2019, passengers in Wales benefitted from one of Network Rail’s first digital railway initiatives.

The traffic management system was launched in South Wales to help operators manage the timetable – reducing delays for passengers and freight operators. 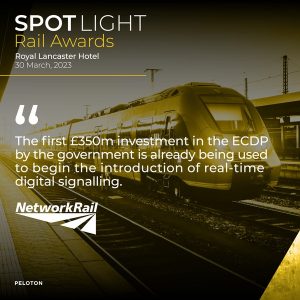 Named ‘Thales ARAMIS,’ the system helps more than 300 trains per day. It provides enhanced real-time data to operators, allowing for controllers to be more proactive than reactive to unforeseeable changes on the network throughout the day.

The use of augmented reality (AR) – a first for Network Rail in October – has put architects’ designs into passengers’ smartphones.

Augmented Reality has been increasingly used within the construction industry and is transitioning into rail. Putting designs into the smartphones of developers, contractors, and passengers allow people to see a more accurate depiction of finished projects.

Used for the first time last October, Network Rail contributed its design data to an app that enables passengers to use AR to see replacement footbridges at stations.

The app will support Network Rail’s engagement with passengers while delivering footbridges across the network throughout Control Period 6 (1 April 2019 to 31 March 2024) and beyond.

3D and 4D modelling bring multiple forms of technology together

In a recent report, Network Rail explained: “3D and 4D modelling are helping us execute significant projects, such as the refurbishment of the two-mile-long Sevenoaks tunnel and the major upgrade of Liverpool Lime Street station, both in 2018.”

Quadrant Transport heard: “In Sevenoaks, our team used several innovations, including 3D modelling. It helped them prove the suitability of special padded sleepers for reducing stress to the Victorian structure and enabling faster train speeds.”

As technology in rail develops further, it is often the case that two or more forms of technology are used together. For example, at Liverpool Lime Street, Network Rail used virtual reality to carry out 4D modelling during preparations for the work – an emerging but hugely progressive technology application for the railway.

This reduced the amount of time needed on track and the potential to impact train services. It also allowed planners to avoid overlaps between different engineering teams and identify potential risks and hazards that could have potentially affected the railway’s reopening.

Has your company improved efficiency or delivered a more effective project, service or solution due to innovative technology? Then enter in the Best use of Technology category for free today.

Located at The Royal Lancaster, London, on 30 March 2023, join us for an evening of celebration to recognise best practices within rail and position your company in the SPOTLIGHT of the industry.