More than 1,000 new EV chargepoints are to be installed in a new pilot, as part of a wider £450 million scheme by the Department for Transport. Quadrant Transport explores how the new chargepoints will encourage the transition to electric and help the UK move towards net zero.

Backed by £20 million of government and industry funding, the scheme aims to see the rollout encourage more motorists to go electric. This will help improve air quality as the UK focuses on reaching its net zero targets and see drivers save money on fuel and running costs.

Nine Winning Local Authorities Will Benefit From The Chargepoints

Speaking about the importance of seeing more EV chargepoints, Decarbonisation Minister, Trudy Harrison said: We want to expand and grow our world-leading network of EV chargepoints, working closely with industry and local government, making it even easier for those without driveways to charge their electric vehicles and support the switch to cleaner travel.”

This scheme will help to level up electric vehicle infrastructure across the country, so that everyone can benefit from healthier neighbourhoods and cleaner air.

Nine winning local authorities will share £10 million of government funding in the first tranche of the planned £450 million scheme, with winning pilot bids supported by an additional £9 million in private funding. A further £1.9 million will come from public funds across local authorities.

Winners of the pilot fund are the following: Barnet, Dorset, Durham, Kent, Midlands Connect (with Lincolnshire as a lead authority), North Yorkshire, Nottinghamshire, Suffolk, and Warrington.

Investing In Streetside Charging Will Be A Focus

The scheme will support residents without private driveways to have better access to EV chargers, as well as grow the charging network across the country, supporting the nation’s uptake of zero emission vehicles and enabling more people to drive and charge. 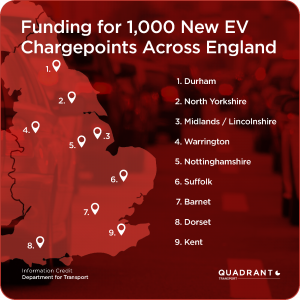 RAC head of roads policy Nicholas Lyes said: “We know that there are many drivers who do not have driveways or any form of off-street parking, so investing in streetside charging is an absolute necessity.

“Drivers can also look forward to the prospect of local charging hubs which will give them somewhere to quickly charge their vehicles without needing to drive any considerable distance.

The goal must be to spark electric vehicle uptake by creating an excellent charging infrastructure that caters for everyone’s needs.

In The Future An Additional 10,000 Chargepoints Could Be Seen

Local authorities will have the opportunity to provide feedback on how to grow the network and the role the private sector can play through the scheme.

Building on the success of the On-Street Residential Chargepoint Scheme (ORCS), the new LEVI fund has seen nearly 2,900 chargepoints installed so far with funding provided for approaching 10,000 additional chargepoints in the future.

In addition to this, following the growing demand from local authorities, the Department for Transport has also announced a further £10 million in funding which has been brought forward for this year. Therefore, this year’s ORCS funding has been brought to £30 million to help maintain ongoing installations.