Eight ambulance trusts in the North West are set to trial electric-powered ambulances. Quadrant Transport looks at how electric ambulances will help the NHS meet its decarbonisation targets.

Being implemented as part of a £2.1 million pledge by the NHS, local ambulance trusts will gain 21 new electric ambulances with eight already in use. The pledge is part of a wider aim to decarbonise the NHS and achieve net zero emissions by 2040.

Six of the electric ambulances will be allocated to mental health aiming to provide rapid response times for patients. The new dedicated mental health response vehicles, which are already in action in the North West, differ in design from traditional ambulances.

While they still carry the equipment enabling them to respond to serious life-threatening emergencies when required, they have fewer fluorescent markings and a much less clinical interior to help put patients at ease.

Director for Primary and Community Care Improvement at NHS England, James Cook, said: “These new vehicles are an important addition to our emergency fleet and will change the way we deliver care in the community -”

– helping us see more patients whilst reducing demand on traditional double crewed ambulances. All while helping the NHS meet its broader green ambition.

A Wider Range Of Patients Will See Services Allocated To Them

In addition to this, the NHS has also provided electric variants of ambulances for a wider variety of emergency services. This includes those equipped to attend less severe emergencies and those designed to transfer seriously ill patients to and from high dependency units.

By helping reduce workload and stress amongst double-crewed ambulances, the NHS will be able to allocate its services to a wider range of patients within the local area. 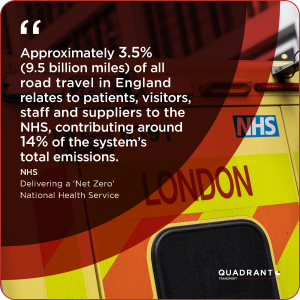 Dr Nick Watts, Chief Sustainability Officer and NHS England, said: “We know that climate change has an impact on health, and the NHS can play its part in preventing ill-health by looking at new ways to reduce emissions.

“Each electric vehicle costs less to run and maintain, meaning these new vehicles will spend more time on the road and change the way we deliver care in the community – whilst also cutting our carbon footprint as we strive to make NHS services greener and more efficient as part of our ambition to hit net zero by 2040.”

Since the publication of the strategy, the NHS has made good progress: performing the world’s first net zero delivery and surgery, launching the first zero emission ambulance, embedding the response to climate change into the governance and strategy of every trust, and investing over £550 million in energy efficiency and renewable energy as part of the UK Government’s Public Sector Decarbonisation Scheme.