by Jack Donnelly 2 years ago1 year ago
489views

In a new interview ahead of next week’s Peloton’s East West Main Line webinar series, Martin Tugwell, president of the Chartered Institution of Highways & Transportation (CIHT) and programme director at England’s Economic Heartland, said the importance of the developing rail route connecting Cambridgeshire and Oxfordshire has been reaffirmed by the Coronavirus pandemic in bouncing back economically and socially in the heartlands region.

“We often talk about fuel poverty being a barrier that the less well off have to deal with,” Martin told Quadrant Transport. “But in many ways, transport is as much an issue in terms of transport poverty.

Later this year will feature the release of EEH’s Transport Strategy, highlighting the transformative potential of the East-West Main Line, Cambridge Autonomous Metro, and the £160m Cambourne to Cambridge busway, amongst other key projects in the region. 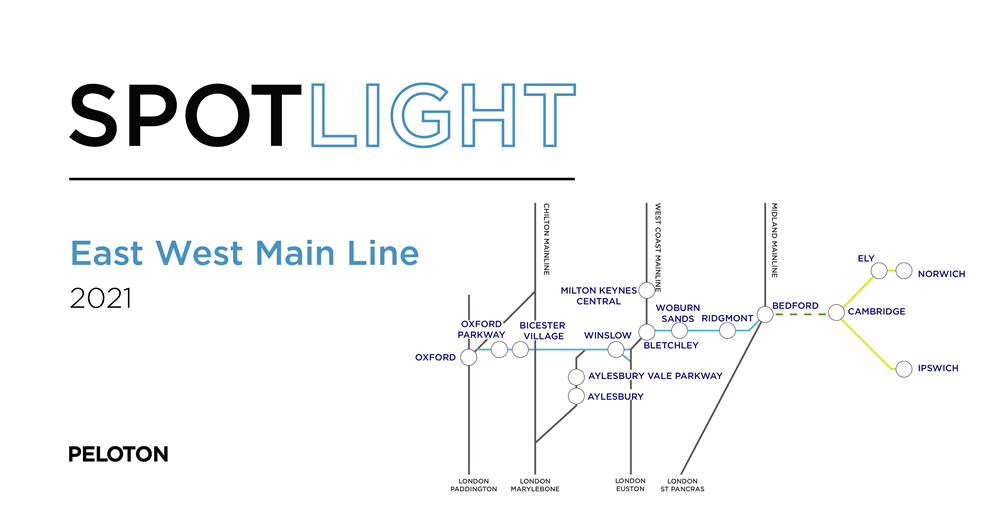 Martin tells Quadrant Transport that the East-West Main Line is at the centre of the strategy. EEH has been working with partners between Bletchley and Bedford to see “what it is they need” in terms of complementary transport measures, harnessing the potential of the EWML as a whole.

“We’ve talked about East-West as a project for 25 years,” he said. “Seeing real progress being made on the ground takes it into another level.

“It gives confidence to people that we are going to see this happen.”

Martin will be a keynote speaker at Peloton’s East-West Main Line webinar starting 11 January. Click here to register for free!

The excitement of the EWML and surrounding mobility projects is stoked further when considering the decarbonisation potential of the region, Martin says. The UK Government’s commitment to net-zero carbon emissions by 2050 is ambitious, but the Covid-19 pandemic has led to even greater ambition on the importance of transport in the region.

“What has become clear over the last 12 months is a real sense of urgency from people and an understanding of that urgency when it comes to the decarbonisation agenda,” Martin said.

“That’s great, and that gives us the confidence that we’re in the right direction.” Martin added that the line will not just reduce the amount of road users, but the relieved capacity on surrounding line when the route is built will also help the freight industry, reducing HGV haulage and the region’s carbon footprint.

Though the destructive impacts of the Covid-19 pandemic have caused uncertainty on passenger numbers and what a public transport system really means, Martin notes that the emergence from the pandemic can lead transport systems to do things differently.

“The philosophy that we’ve had with the Transport Strategy that at the heart of the transport is the user,” explained Martin. “If you do not understand why they’re travelling, or what they’re travelling for, it is harder to get that change.”

Whilst focusing on the user may be a given for a transport system, projects like the East-West Main Line can be instrumental in reducing inequalities around the region.

“Depending on where you live and where you are raised in Oxford, the difference between the life expectancy if you’re in the wealthier part of Oxford around 10-15 years longer than if you are born and raised in a less wealthy part of Oxford. That’s in Oxford!” lamented Martin.

“That’s the inequalities, and that’s the need for levelling up.”

It is true that the regions around the East-West Main Line can be transformed by the route and the economic benefits coming with it – providing a shining light for areas as they build back from the destructive effects of the Covid-19 pandemic.