by Floyd March 1 year ago1 year ago
1kviews

After Furrer+Frey participated in the most recent SPOTLIGHT: Wales event, we take a closer look at the company after they were winners of two projects in the DfT and Innovate UK’s First of a Kind competition.

Furrer+Frey were recently involved in Wales’ net-zero objectives event where Noel Dolphin, Head of UK Projects, was our guest speaker. Noel gave an extensive insight into how the Welsh rail network is using conventional electrification to help decarbonise the sector.

In the event, Noel explained the benefits of electrified trains, both for the sector and for the passengers. Addressing the audience, he explained: “In electric mode, the new trains are 60% lower in carbon emissions than the trains they replaced that ran diesel.”

These emissions will be reduced even further over the next 20-30 years when the grid is decarbonised further, so the 60% saving in emissions is just the start.

Environmental benefits have already been noticed. For the first time in 167 years, the fumes at Paddington are below a level that would be considered hazardous to health. “Air quality is an increasingly important thing we [the industry] need to be considering,” added Noel.

As previously explained, the benefits also extend to the passengers. This will boost the industry as we recover from the pandemic and encourage people back onto trains.

Those who travel on an electric train are 46% more seats on the new trains, and the improved efficiency and speed of the trains allow for shorter commuter times. Nearly half an hour is saved when travelling from Swansea to Wales.

Adding to this, Noel explained: “If there is a delay, the trains have the power capacity to travel faster and catch up. Reliability is also a big thing that goes alongside increased acceleration. These new trains can reach 125 mph in five minutes. The old trains got there in fifteen so, that means trains can recover a lot quicker.”

Keeping on the theme of reliability in electric trains, the audience heard that in England, where some branch lines were electrified, they are now 300% more reliable.

Furrer+Frey have 100 years of experience in electrification

Electrification of the rail sector is not a new thing for Furrer+Frey. With over 100 years of European experience, Furrer+Frey are the experts in conventional electrification.

Just before WWI, the railway in Switzerland became one of the first lines in the world to be built as electric railways from scratch. The founders of Furrer+Frey were at university at the time but realised the potential of electrification in the future. 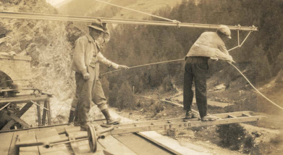 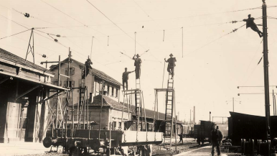 InnovateUK and DfT recognise electrification is a key factor

This rich history has migrated to the UK and Furrer+Frey recently won two ‘first of a kind’ competitions. The pitched projects went live on Friday 1st July 2021.

The first project focuses on the freight industry and how to help with the decarbonisation of freight. Noel explained: “At the moment, very few freight routes are electrified. So, a freight route that might run down an electric railway, however, because the freight sidings aren’t electrified at either end it is just a diesel train.”

Tackling this issue, Furrer+Frey looked at ways in which they could electrify freight depots. The difficulty being the safety of loading and unloading shipping containers near 25,000-volt overhead wire, they were “looking at a system where you could just switch off and move out the way the overhead line.”

This project started on Friday at a Dunbar cement factory in Scotland that runs along the east coast mainline which is electrified.

The second project was to try and create a carbon negative overhead line mast. Traditionally with overhead line electrification, you see lots of steel masts down the side of the tracks every 55m or, so.

“So, we thought, are there other technologies and material we can use that will reduce the embedded carbon or make it negative.” To achieve this, they looked at composites that used recycled waste products from other rail projects, preventing the materials from being landfilled.

Furrer+Frey are working with three Universities, Cranfield, Newcastle and Southampton. Also, composites manufacturer Pro-Drive to look at whether they can make a composite material that uses wastes from other industries to create masts and create something that has negative embedded carbon.

Noel explained: “With both [the projects] we were really pleased as the government talk a lot about hydrogen in the rail. We were pleased they invested in conventional electrification.”

“There needs to be a rolling programme of electrification in the UK,” explained Noel.

“In terms of benefits, there are quite a few, for passengers more reliable, faster trains with more opportunities to find seats, less noise, less pollution.”

But for the sector, the main benefit is the savings of long term cost savings, as well as decarbonisation. This is what the big focus for the Government is, as we recover from the pandemic and with less revenue from rail passengers.

“Scotland has had a big rolling programme, their cost per km is a fraction of England and that is because they’ve been doing it for ten years. If you want to do it affordably, it has to be a rolling programme.”

Rounding up the interview, Noel stated: “The UK has to decarbonise all of its industries and there is a risk that, as things like cars decarbonise, the railway could be left behind.”